Whether it’s in a private setting or outdoors in displays of public nudity, naked girls exercising are sights to behold. Working out naked does wonders for their health – and for yours too! In this video, eleven girls enjoy flexing and stretching their beautiful bodies with an assortment of exercises.

Dominika and Penya are a typical pair of naked girls exercising. They begin with some simple yoga poses before more vigorous star-jumping and dancing, then finish with stretching their lithe bodies. Gwen gets a full-body paint prior to going on a long bike-ride, then gets hosed down to remove the paint. She continues her naked girls exercising activities by strenuous jumping up and down on a trampoline, almost to exhaustion. She is then joined by Andrea, and the two go horse-riding along a country road and into a large field. Finally, the pair run freely together in the field, as the fresh air caress their faces and bodies.

In a more pensive mood, the voluptuous Alyssia goes for a naked stroll through a market, then along a footpath, all the while taking great pleasure in being watched by the people passing by. She sits on a concrete fence before putting her clothes back on and departing. Anita goes to the resort town of Sitges, about thirty kms south of Barcelona, and models for a naked Agi in a photoshoot on the rocks of a cliff, before Agi poses naked lying on a train track! Anna and Marina continue the more reflective aspects of the video by posing naked on top of a cliff overlooking the ocean.

The action heats up in Loft 13, a nightclub in Barcelona, as Diedre and Andrea pose naked and dance excitedly together. This is followed by some running in the countryside and less strenuous yoga exercises in a forest. Gwen then returns, cavorting naked in the rain followed by a few minutes in a sauna and swimming and playing in a pool. Quintessential Aussie girl, Shannon, completes the array of naked girls exercising in this video by performing ballet to Debussy’s Clair de Lune in the Sala De Espejos at the Palacio Pignatelli in Spain!

No doubt about it, watching naked girls exercising is a treat. And it’s also a great pleasure for them to exercise in a way that gives so much pleasure to others.

There are no reviews yet.

Be the first to review “Exercise Girls” Cancel reply 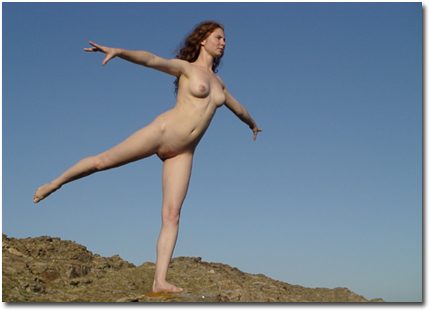 Information submitted via this form will only be used by the Naturally Naked Nudes marketing manager for Newsletters and offers, and will not be shared with a 3rd party.