Naked fun – in the raw – is what this video is all about. However, unlike most videos, which are carefully edited with appropriate comments and appealing music, Raw Fun 1 contains the original footage. No clever editing or music overdubs. Just naked fun at its best!

The video begins and ends with short sequences of a naked Dominika sliding down a long piece of plastic topped with water that has been laid down on a grassy slope behind her house. She lets herself fall down the incline ending up on a padded piece of foam.

The next sequence begins with Sally twirling around and wrapping herself with a long chord made of beads. After being completely entangled, she slowly unwinds. Marta follows suite but unwinds quickly and becomes dizzy. Not wanting to miss out on the naked fun, Gwen also joins in the action and flops on a couch behind her after unwinding herself from the beads. Sally and Marta then stand next to each other and wrap and unwrap the beads around themselves. The two of them then have fun together posing for the camera in various positions, including some very sexy dancing and rolling around!

Scene 2 features a highly spirited Alice having naked fun dancing wildly in the Klec nightclub situated in the Czech Republic. After having several drinks, she just can’t be stopped – much to the enjoyment of the other patrons!

There are no reviews yet.

Be the first to review “Raw Fun 1” Cancel reply 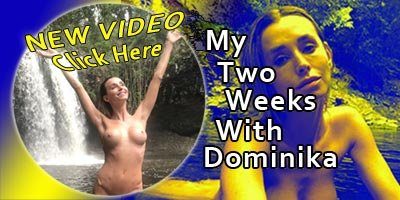